Researchers are carrying out various experiments to check the currently valid Standard Model of elementary particle physics. They are also searching for other phenomena which occur beyond the Standard Model – for “new physics”. Their search is based on theoretical models that specify what the experimental physicists have to look for. A group at the Max Planck Institute for Physics (MPP) has presented a computation which provides a precise description of a special aspect of the Higgs boson. The paper has been published in the science journal Physical Review Letters as a “highlight”. 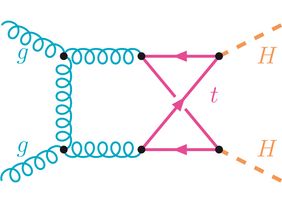 One of the Feynman diagrams which contribute to the high-precision computation of the Higgs pair production. (Image: S. Jones/MPP)

The so-called Higgs mechanism gives the W and Z bosons – responsible for the weak force – their mass. The fermions, i.e. leptons (electrons, for example) and the quarks also acquire mass by interacting with the Higgs. The Standard Model states that the top quark, the heaviest elementary particle known to date, similarly acquires its mass by interacting with the Higgs boson.

Is there such a thing as a Higgs-Higgs interaction?

Physicists furthermore assume that the Higgs boson also interacts with itself. It is very important to confirm this assumption experimentally, as only then will the Standard Model work as we currently consider it to do. In order to be able to measure this “self-coupling”, at least two Higgs bosons must be created in the collision experiments currently being carried out in the Large Hadron Collider (LHC).

These events, however, can be observed only rarely. Hopes therefore rest on the modernized high-luminosity version of the LHC which is to become operational sometime in or after 2025. The scientists expect that sufficient Higgs pairs will then be produced in order to learn more about the Higgs self-coupling.

Exact computation instead of approximations

The Phenomenology Group at the MPP has now completed a high-precision computation that allows the Higgs pair production to be described more exactly. This required them to compute so-called 2-loop integrals, which contain massive Higgs bosons and massive top quarks in addition to massless gluons (see diagram).

The computation of these Feynman diagrams is mathematically very complex, which explains why only various approximations were known previously. With advanced numerical methods as developed by the MPP’s Phenomenology Group it has been possible to publish the most accurate computation for Higgs pair production so far.

“At this point in time we cannot foresee whether this will at some time lead to ‘new physics’,” says Gudrun Heinrich. “But we now have an excellent theoretical basis for future experimental measurements.”

The precision computing was performed at the supercomputer “Hydra” run by the Max Planck Computing & Data Facility in Garching.