The MPP has spent the last few weeks equipping the ATLAS detector, the largest physics experiment in the world, with twelve new muon chambers. These instruments operate with much higher precision and read-out speed than their predecessors. They were developed and constructed at the MPP, including read-out electronics. In 2019, a further 16 of the new generation of muon detector are to be integrated into ATLAS. 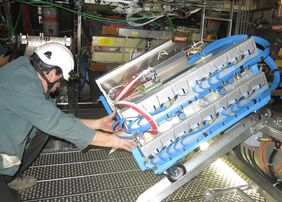 Installation of a muon chamber in the ATLAS detector (photo: ATLAS Technical Coordination/CERN)

The commissioning, transport and installation at CERN went according to plan. The chambers were finished, put into operation and tested at the MPP at the beginning of November 2016. The installation itself took place in January and February. The physicists are now in the process of integrating the detectors into the data system of the ATLAS detectors.

The new muon chambers will thus be operational for the next measurement run at the Large Hadron Collider: After a maintenance break of several months, the accelerator will be started up again in June 2017 with the first proton collisions and recording of measurement data.