The KATRIN experiment recently celebrated its “first light”. The Karlsruhe Institute of Technology has announced that the detector has registered, for the first time, electrons that have initially flown through the 70-meter-long beamline. As the most precise measuring scale in the world, KATRIN’s task in future will be to determine the mass of the smallest particle of matter, the neutrino. This measurement is done indirectly via electrons that are created together with neutrinos when heavy hydrogen decays. 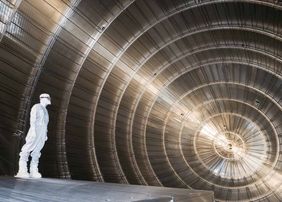 The regular measuring operation is set to start in fall 2017. The Max Planck Institute for Physics is involved in the project through its Research Group "KATRIN and TRISTAN: Neutrinos and dark matter”. In addition, Susanne Mertens’ team wants to use the KATRIN experiment to investigate sterile neutrinos.

"In contrast to the left-handed ‘standard’ neutrino, this is a right-handed variant,” explains Group Leader Susanne Mertens. “The sterile neutrino can be thought of as a big, heavier brother of the familiar neutrino."

The properties of sterile neutrinos also make them candidates for dark matter. The particles have only a hypothetical existence thus far, however, as they have yet to be detected. Using a new experiment – TRISTAN – the MPP scientists want to investigate whether the sterile neutrinos actually exist.

The TRISTAN detector is currently being developed by an international research team. At the heart of the detector is a multi-pixel silicon chip that was produced by the Semiconductor Laboratory of the Max Planck Society.