Experimental neutrino physics – this is the main topic of a new Research Group at the Max Planck Institute for Physics. The Group will is led by Susanne Mertens, who has previously worked on the KATRIN and the Majorana experiments at the Karlsruhe Institute for Technology and Lawrence Berkeley National Laboratory. At the MPP, Merten’s team will search for sterile neutrinos and investigate neutrinoless double-beta decay. 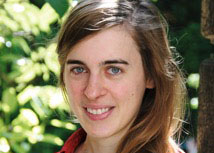 Mertens’ new position at the MPP also includes a tenure track professorship at the Technical University of Munich (TUM). This is made possible through a joint programme run by the Max Planck Society and the TUM, which offers highly qualified young researchers long-term career options.

The new group will work in the field of experimental neutrino physics: One topic here is the as yet unknown mass of neutrinos, which is the aim of the KATRIN experiment, on which Mertens has worked for several years.

At the MPP, the Group will focus on the TRISTAN Project which Mertens initiated in 2012: The project is searching for a sterile neutrino whose mass is in the kiloelectronvolt range. This version of the neutrino is a possible candidate for dark matter. The team will collaborate closely here with theoretical physics at the MPP.

The second topic is double neutrinoless beta-decay, which scientists want to observe with the Majorana experiment. The experiment is located in the Sanford underground laboratory in the US. Here, the Group hopes for synergies with the GERDA experiment, in which the MPP is also involved.

Since its start at the MPP the group has organized two international scientific events: The TRISTAN meeting in Munich and an analysis workshop in Karlsruhe.