The Max Planck Institute for Physics (MPP) is opening up a new research field. A workshop from November 21 - 22, 2016 has marked the start of activities for an innovative axion experiment. Axions are still only purely hypothetical particles. Their detection could solve two fundamental problems in particle physics: What dark matter consists of and why it has not yet been possible to directly observe a CP violation for the strong interaction. 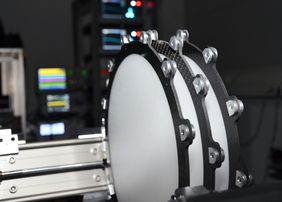 Test setup of the experiment with sapphire plates. In the future, 80 lanthanum aluminate disks will allow the detection of axion-photon-conversion. (photo: B. Wankerl/MPP)

The “MADMAX” (Magnetized Dielectric Mirror Axion Experiment) project is the MPP’s commitment to axion research. Axions are so far only a theoretical prediction and are difficult to detect: on the one hand, they are roughly 10 billion times lighter than electrons; on the other, their interaction with other matter particles is extremely weak, and thus leaves hardly a trace.

Axions can react with light particles (photons) in a very strong magnetic field, and thus become detectable. The new detector concept, which the scientists at the MPP want to develop and test together with other research institutions, is based on this fundamental assumption. The kick-off meeting took place on November 21 and 22 at the MPP.

Focus on axions formed after the cosmic inflation

There are two justified scenarios for the formation of axions: The particles could have formed even before the cosmic inflation, the rapid expansion of the universe after the Big Bang. A second scenario puts the “birth” of the axions after the inflation.

The planned experiment is set to focus on the detection of axions from the post-inflationary scenario. The scientists estimate the mass of these axions to be between 40 and 400 microelectronvolts. This assumption is supported by a study recently published in Nature as well. The wavelength of the photons in this case is in the microwave region of the electromagnetic spectrum; their frequency is between 10 and 100 gigahertz.

The conversion of axions into photons is a rare event; moreover, it must be possible to reliably distinguish the axion-photon yield from other light particles in the electromagnetic spectrum.

The experiment consists of three sections and comprises:

Detection of one photon per second

In this system, axions can be converted into photons on the surfaces of the disks. When the plate separation is correct, they superimpose to form a stronger signal; at the same time, the photons can leave the system unhindered in the direction of the detector.

The physicists hope that it will thus be possible to produce one photon per second with a precisely defined wavelength. They would then need several years to measure the complete mass range between 40 and 400 microelectronvolts, however.

An instrument whose structure is similar to that of a radio telescope, albeit several times smaller, is to be used as the actual detection instrument. The detector cooled with liquid helium to -270 degrees Celsius receives the incoming microwave signal, which is amplified and then recorded.

The MPP will commission a design study for the construction and commissioning of the magnet. The MPP scientists hope for initial results in mid-2018.

MADMAX is one of the projects supported within the newly granted Collaborative Research Center (CRC) "Neutrinos and dark matter in astro- and particle physics (NDM)" by the German Research Association (Deutsche Forschungsgemeinschaft, DFG) . NDM's spokesperson is Elisa Resconi, professor for experimental physics at the Technical University of Munich.