The innovative AWAKE technology is based on a plasma wave on which electrons "surf" and are accelerated to collide with other particles. A study has now shown how the surf waves can be precisely controlled – an essential prerequisite for AWAKE to one day be used for particle physics experiments. The work has appeared in the journal Physical Review Letters. 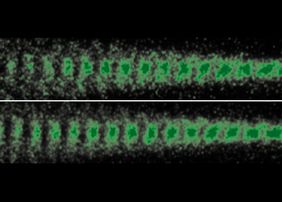 The evolution of a proton bunch in plasma can now be precisely controlled. A phase shift can be seen between the upper and lower images, which depends on when the seed electron bunch is fed into the plasma. (Image: AWAKE)

The wave in AWAKE (Advanced WAKefield Experiment) is generated by a proton beam in a plasma fluid. The proton beam originates from one of the pre-accelerators of the LHC (Large Hadron Collider). An initial wave builds up in the wake of the protons, but it is not yet suitable for accelerating electrons. Only when the initial proton beam splits into smaller sections does a wave that can be surfed on emerge.

It all depends on the right moment

Conveniently, the proton beam splits itself into millimeter-short bunches in the plasma. The spontaneous occurring of instability in the plasma is responsible for this process, which is called self-modulation. However, the wave generated by self-modulation alone is not sufficient to accelerate electrons: What matters is when and where the surf wave is generated - a process that the researchers must actively control.

Patric Muggli, who heads the AWAKE group at the Max Planck Institute for Physics (MPP), explains why: "The goal of AWAKE is to accelerate electrons to high energies. The electrons should therefore take as much energy as possible from the plasma field. To do this, they have to jump onto the wave at the right moment – just like a surfer catching a wave."

Last year, the researchers already succeeded in defining the beginning of the self-modulation. Now they have been able to improve the process and clock the start of self-modulation to within fractions of a second. "The trick is that we first send a small packet of electrons into the plasma," explains Livio Verra, a researcher at MPP and CERN and first author of the study. "This is followed by the long proton beam, which can thus be broken down into short proton bunches at a specific time and in a controlled way."

The research team also succeeded in controlling other properties of the plasma field that affect the quality of the self-modulation. "We found that we can directly influence processes in the wake: The speed at which the first wave builds up – and its height, i.e., its amplitude," Verra explains. The parameter is the charge of the beams: The charge of the electron beam determines the amplitude of the primary wave; the charge of the proton beam defines how fast it grows.

The better one gets a handle on the physical processes in the wake, i.e., the first wave, the more effectively the self-modulation can be controlled. "This will ultimately allow us to model the actual surf wave," Muggli says. "This is another crucial step in realizing AWAKE as the accelerator technology of the future."