There are many questions surrounding the elementary particle neutrino, in particular regarding its mass. Physicists are also interested in whether besides the “classic” neutrinos there are variants such as the so-called sterile neutrinos. The KATRIN experiment has now succeeded in strongly narrowing the search for these elusive particles. The publication appeared recently in the journal Physical Review Letters. 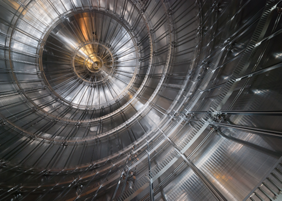 The spectrometer of the KATRIN experiment, set to measure the neutrino mass. (Photo: M. Zacher/KIT) 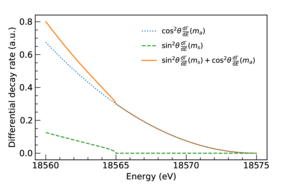 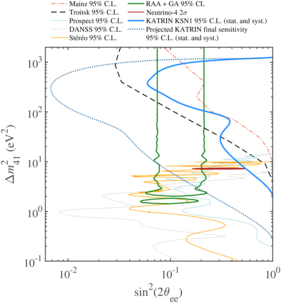 Strictly speaking, the neutrino is not a single particle but rather comprises several species: the electron neutrino, the muon neutrino, and the tau neutrino. These particles are constantly transforming into each other in a process referred to as neutrino oscillation. It is assumed that neutrinos have mass; this is to be determined in the KATRIN experiment, which started in 2019 at the Karlsruhe Institute for Technology (KIT). According to the results to date, the neutrino has a mass less than 1 electron volt.

KATRIN could also be used to track down related species that have so far only been hypothetical: The sterile neutrinos. The heavier branch (mass in kiloelectronvolt range) is considered a candidate for dark matter and will be sought after a new detector is installed in KATRIN. Besides this, there could also a lighter sterile neutrino type.

Susanne Mertens and her team at the Max Planck Institute for Physics (MPP) succeeded in defining new exclusion limits with the help of KATRIN. “With our evaluations, we were able to significantly reduce the search area for this neutrino,” says Mertens.

With the new analysis of the KATRIN data, developed by the group of Susanne Mertens and Thierry Lasserre at MPP, the existence of sterile neutrinos with a mass between about 3 and 30 electronvolts and a mixing ratio greater than 10% can now be ruled out. This result complements previously achieved exclusion limits.

Search by measuring the neutrino mass

But how can KATRIN find sterile neutrinos? Using the same method, the experiment also determines the mass of the active neutrino. The mass of the neutrino can be measured via radioactive decay. KATRIN uses tritium (heavy water) for this purpose. When a neutron is converted into a proton, one neutrino and one electron are produced. The decay energy of 18.6 kiloelectronvolts is divided between them.

The detection of the light sterile neutrino would follow the same principle. If sterile neutrinos are also released during radioactive decay, it would leave a visible trace in the energy spectrum of electrons. “Then a clear bend would appear in the curve”, explains Mertens. “This would allow KATRIN to not only determine the mass of active neutrinos but also prove the existence of another neutrino species.”