The CTA cooperation decided on the future sites of the Cherenkov Telescope Array: The telescopes will be located at the Paranal Observatory of ESO (European Southern Observatory) in Chile and on La Palma, Spain. There the IAC (Instituto de Astrofísica de Canarias) runs the Roque de los Muchachos Observatory. CTA will enter into detailed contract negotiations with both institutions. 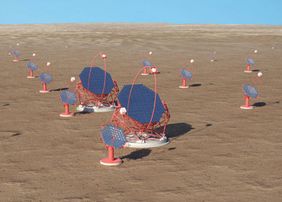 CTA will be the world’s largest observatory for gamma rays. These results from processes in the Universe that emit high amounts of energy, i.e. black holes, supernova remants, pulsars and binary stars.

To cover a wide angle of the night sky, the telescopes will be mounted at two sites on the northern and southern hemisphere. The two sites include arrays of a few major and a larger number of subsidiary telescopes. La Palma will host about 20, Paranal about 100 telescopes.

Besides Spain and Chile, CTA also evaluated sites in Namibia and Mexico. "All sites considered in this final round were of high quality, and the enthusiasm and strong support of CTA by the site proponents made this a very difficult decision for the Resource Board,” said CTA Spokesperson Werner Hofmann (Max Planck Institute for Nuclear Physics).

The CTA design includes telescopes of different sizes: Small 6-meter telescopes for a high energy range, medium sized telescopes with mirror diameters of 12 meters and large 23-meter telescopes, specialized in measuring low energy levels. The Max Planck Institute for Physics is responsible for the mechanical structure and the design of the 23-meter telescopes - requiring the highest technological features.

The CTA scientists at the MPI for Physics are pleased with the decision: “The components’ design and development largely depend on the sites,” explains Thomas Schweizer, coordinator for the large telescopes mechanical structure. “Now we can start building and implementing the telescopes. We plan to mount the first telescope in about a year’s time.”

The sites in Chile and Spain

The southern site is located about 10 kilometers from ESO’s Paranal Observatory in the Atacama Desert, considered to be one of the driest and most isolated regions on earth – ideal conditions for year-round observation. In addition, the collaboration with ESO offers CTA the opportunity to take advantage of existing infrastructure (roads, accommodation, electricity, etc.) and access to established facilities and processes for the construction and operation of the observatory.

The northern site is located on the existing site of the Instituto Astrofísica de Canarias Observatorio del Roque de los Muchachos on the island of La Palma. At 2,200 meters altitude, the site currently hosts the two Major Atmospheric Gamma Imaging Cherenkov Telescopes (MAGIC) telescopes. This location offers an ideal atmosphere that is mostly free and clear of pollution and turbulence for year-round observation.