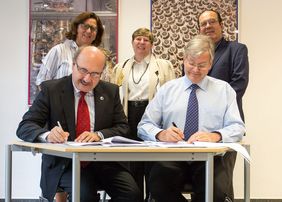 CTA’s northern hemisphere site will be located on the existing site of the IAC’s Observatorio del Roque de los Muchachos on the island of La Palma, the fifth largest island in the Canary Islands. At 2,200 m altitude and nestled on a plateau below the rim of an extinct volcanic crater, the site currently hosts the two Major Atmospheric Gamma Imaging Cherenkov Telescopes (MAGIC) telescopes. This location offers excellent conditions for astronomical observations.

“This is a big step, which allows CTAO to start work on the ground,” said CTAO gGmbH Managing Director Ulrich Straumann. Rafael Rebolo, Director of the IAC, was very positive about the future: “We are looking forward to a great partnership with CTA and expect exciting discoveries with these telescopes."
The agreement allows the construction of the CTA northern array to proceed at the Roque de los Muchachos site and ensures access to the infrastructure and common services needed for the operation of the Observatory, including the digital connection of the CTA network with the rest of the world. In return, Spain will receive 10 percent of the observation time in the northern site, with part of this transferable to the southern hemisphere. Beyond provision of the northern site, Spain plans to make major contributions to the construction of CTA.

"The full sky coverage and excellent conditions provided by the IAC site, together with the ESO site in Chile, are crucial for achieving CTA's ambitious science goals," said CTA Spokesperson Werner Hofmann.
Construction of a Large-Sized Telescope prototype is currently underway on the La Palma site and can be watched live here.

The Max Planck Institute for Physics is part of the international research collaboration for the LST and responsible for the substructure, the mechanical configuration, the rail system and parts of the camera mounting.

Negotiations with the European Southern Observatory (ESO) for the southern hemisphere site near ESO’s existing Paranal Observatory in Chile are expected to conclude before the end of 2016. If all goes as planned, construction will begin in 2017, with first telescopes on site in 2018.