30 years ago, 88 research institutions signed a Memorandum of Understanding for the ATLAS experiment at CERN. To date, ATLAS is the largest particle detector ever built. The Max Planck Institute for Physics (MPP) has been in the lead from the very beginning: MPP scientists drove the large-scale project and contributed crucial concept ideas. The MPP was also involved in the construction of central components. This applies in particular to the development and construction of the muon system, the hadronic calorimeter and the innermost tracking detector. 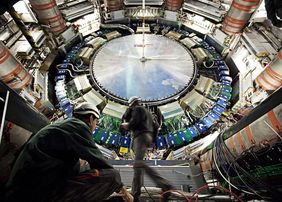 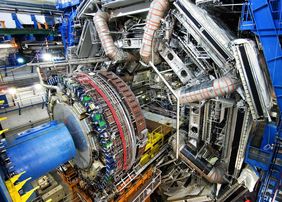 View into the open ATLAS detector: three of the outer muon chambers (right), the orange striped 5x25-meter magnetic coils, and the end cap of the hadronic calorimeter (center) can be seen. (Photo: ATLAS/CERN)

Even though the letter of intent of October 1, 1992, is considered the birth of the ATLAS experiment, its planning goes back to 1984. Already at that time, the particle physics community started to discuss the plan to replace the planned LEP accelerator with a much more powerful machine: The Large Hadron Collider (LHC) with collision energies of up to 14 tera-electronvolts (TeV).

With this project, the researchers pursued, on the one hand, the goal of testing the Standard Model of particle physics and finding its last missing building block, the Higgs boson. On the other hand, they hoped to discover "new physics" - for example, to find evidence for the so far hypothetical Supersymmetry. Parallel to the development of a new accelerator, the first project ideas for detectors emerged, allowing to record and evaluate proton-proton collisions produced in the LHC.

"Well into 1992, there were still several competing conceptual designs for large-scale detectors at the LHC. Two of them went by the names ASCOT and EAGLE," says Siegfried Bethke, director of high-energy physics at the Max Planck Institute for Physics.

The two concepts were merged in 1992 under the new name ATLAS (*). The Memorandum of Understanding to build this detector was signed by 88 research institutions from 24 countries. In Germany, the MPP was the pioneer and driver for the new ATLAS project.

"Under the directors Friedrich Dydak, Volker Soergel and finally Siegfried Bethke, our institute developed and designed essential components for the ATLAS detector," says Hubert Kroha, head of the ATLAS Muonsystem working group at MPP. "This concerns in particular the technical design of the muon detectors."

In addition, researchers at MPP were involved in the development of one of the two end caps of the hadronic calorimeter, which absorbs and measures the energies of most particles. The third component, with essential contributions from the Max Planck Semiconductor Laboratory as well as MPP, was the inner track detector, with its silicon-based, high-resolution strip and pixel sensors.

Successes and future of the ATLAS experiment

In 1993, the LHC Committee gave the mandate to the ATLAS collaboration to submit a concrete project design. On July 1, 1997, the ATLAS project passed the final and decisive hurdle: CERN approved the construction of the ATLAS and CMS detectors, the two multi-purpose particle detectors for proton-proton collisions at the LHC.

Together with ATLAS, CMS and two other detectors, the LHC went into operation in 2009. With the data recorded in the first years of operation, the experiment achieved its most visible success in 2012: the detection of the Higgs boson. Since then, ATLAS scientists have measured the properties of this particle and other parameters of the Standard Model with increasing precision.

After completion of the current third run, the LHC will be upgraded to a high-luminosity version from 2026. "This will allow us to increase the number of collisions by a factor of five," explains Siegfried Bethke. "To fully exploit this potential, we are working at full speed with our partners to make the ATLAS detector fit for the increasing data volumes." Already now, more powerful muon chambers and electronic components are being manufactured at MPP, which will be used in the refurbished experiment.