The LEGEND 200 experiment is set to search for extremely rare neutrinoless double beta decay. Finding it could answer a central physics question: is the neutrino its own antiparticle? To detect the decay, scientists use highly sensitive Germanium detectors. However, in order to identify “real” events, they need to curb down the impact by background signals as much as possible. A research group led by the Max Planck Institute for Physics (MPP) has now made an important contribution towards achieving this goal. They have developed a novel structural system based on the industrial plastic polyethelene naphtalate (PEN) to improve the rejection of non-relevant signals in the detectors. 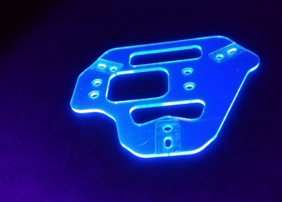 PEN holder for the Germanium detectors in the LEGEND-200 experiment. The plate is illuminated in blue when exposed to UV light. (Photo: L. Manzanillas/MPP)

So far, neutrinoless double beta decay is still a hypothesis. Its half time limit for a Germanium nucleus of at least 1.8 × 1026 years determined by the GERDA experiment is way beyond imagination.

“To finally discover this rare process, LEGEND 200 needs to have an even lower background level than GERDA, its world-leading predecessor experiment”, says Béla Majorovits, who led PEN R&D at the MPP and was MPP project leader of the GERDA experiment. “This is why LEGEND needs additional methods to eliminate background stemming from natural radioactivity or cosmic rays. In physics, we call detection technologies of this kind ‘veto systems’.”

This is where PEN, an industrial polyester plastic, comes in. Its properties make it interesting for applications in particle physics. First, it acts as a scintillator, i.e. when struck by radiation it produces a detectable light flash. Second, it shifts the wavelength of light, making UV light visible for the light sensors. Last but not least, PEN can be used as a structural material at cryogenic temperatures, since its mechanical stability is superior to copper.

Each one of the approximately 130 Germanium detectors of the LEGEND 200 experiment will be mounted on a transparent scintillating PEN plate. Thus, PEN will complement the sophisticated veto systems developed for GERDA: Here, the ultra-pure liquid argon simultaneously serves as active veto system, passive shielding against external radiation as well as cooling agent for the Germanium detectors. "

“Since natural radioactivity can leave background signals in the Germanium detectors, we need to identify and exclude them” says Luis Manzanillas, who is a post-doc of the PEN group at MPP. “If we register a signal occurring in both the liquid argon and in the Germanium detectors, we can tell for sure that it was background. Neutrinoless double beta decay of a Germanium nucleus would leave no trace in the argon.”

Background signals can thus be identified by detecting UV light produced in the liquid argon in coincidence with a signal in the Germanium detector. Since the UV light emitted by the liquid argon is, however, not easily detectable by commonly used photon detectors, special optical fibers are used to shift the wave length of the UV light to visible light – and to guide it to the photo-sensors. By improving the light collection, the PEN material will boost LEGEND’s capabilities to identify background radiation originating from the direct vicinity of the detector array. This was one of the dominating remaining radiation sources in the GERDA experiment.

180 PEN holders to be deployed in the next months

The MPP group has initiated and led the project for the production of PEN support structures. These will meet the extreme LEGEND 200 requirements for radio purity, i.e. with radioactivity so low that it can hardly be measured even with the most sensitive devices. Research and development started some years ago. Recently first PEN plates with excellent radio purity could be produced.

Using these radio-pure plates holders with an optimized design were produced at the Leibniz-Institut für Polymerforschung in Dresden. Recently, these approximately 180 PEN holders were sent to the LNGS (Laboratori Nazionali del Gran Sasso), the location of the LEGEND 200 experiment. They are presently being measured for their radio purity for final validation”, says Manzanillas. “The holders will then be deployed into the experiment in the coming months. We are confident that the LEGEND experiment will benefit from using the PEN technology!”