The GERDA experiment designed to prove the existence of neutrinoless double beta decay is coming to an end. The research collaboration has now evaluated the full data set produced by the experiment and published it in Physical Review Letters. Even though no signal was found, all goals set for the final phase of the experiment were achieved. The progress made with GERDA since 2011 is now being incorporated into the new LEGEND experiment. 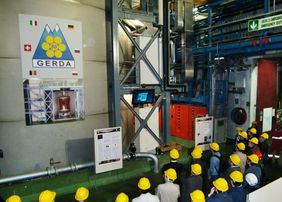 The last measurements of the GERDA experiment were analyzed and published in 2020. The photo shows the experiment's opening in 2010. (Photo: MPP) 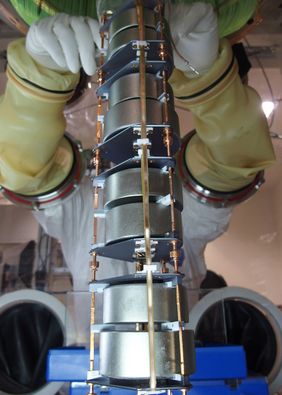 GERDA’s germanium detectors are assembled on a string to be lowered into an argon tank. (Photo: B. Schwingenheuer/GERDA Collaboration)

In the so far undetected neutrinoless double-beta decay, two neutrons of an (atomic) nucleus – here germanium-76 – are simultaneously converted into two protons. One would expect the emission of two electrons and two anti-neutrinos each. If the decay did take place without neutrinos, this would be a hint for “new physics”. The measurement would indicate a violation of the lepton number, thereby proving that neutrinos are their own antiparticles. This would be a highly significant result for particle physics and cosmology and could explain, among other things, why there is so much more matter than antimatter in the universe.

No detection – but high-precision measurements

Neutrinoless double beta decay was not detected in the GERDA experiment. However, with the final GERDA measurements, the mean decay time of germanium-76 as a result of the sought-after decay was specified to at least 1.8 × 1026 years. “Statistically, it takes that long for two neutrons in a germanium-76 nucleus to transform via neutrinoless double beta decay,” explains Anna Zsigmond, a scientist at the Max Planck Institute for Physics. “That is 16 orders of magnitude more than the age of the universe. We also succeeded in eliminating disturbing cosmic and radioactive radiation to a large extent. This would have allowed us to clearly identify the ‘true’ signals of decay.”

The measurements of the GERDA experiment started in 2011 at the Gran Sasso underground laboratory (Laboratori Nazionali del Gran Sasso) of INFN in Italy. There, 1,400 meters of rock form an effective initial barrier to cosmic radiation. The GERDA experiment consisted of 41 germanium detectors with a total mass of 44.2 kg and an 86–88% enrichment of the isotope germanium-76. Germanium-76 is unique because the material is both source and detector for the decay.

Unlike earlier experiments, GERDA did not encapsulate the detectors. Instead, these were cooled directly in ultrapure liquid argon, which also provided shielding against radioactive radiation. Despite meticulous tests, one cannot rule out that the materials used for the experiment are weakly radioactive and thus interfering with measurements.

In order to be able to detect the signals of these radioactive decays, the argon container was additionally equipped with light detectors. Background radiation can also be identified by the time distribution of the individual signals in the germanium detector. In order to shield the detectors from cosmic radiation and radioactivity from the surroundings, the argon cryostat is embedded in a water tank. In order to best utilize the largely interference-free setup, the GERDA research association developed novel detectors and analysis methods.

The future is called LEGEND

The experience with GERDA shows that even larger germanium experiments can be operated largely without background. The successor experiment LEGEND will soon be underway. In the first phase, the participating research institutions plan to install germanium detectors with a total mass of 200 kg in the slightly adapted GERDA infrastructure.

“Measurements of this first phase are expected to begin in 2021,” says Zsigmond. “LEGEND will then be upgraded to 1,000 kg of germanium step by step. In the final phase of the experiment, the discovery potential for neutrinoless double beta decay can thus be improved to over 1028 years."