Scientists report an important milestone in the search for neutrinoless double beta decay (0vββ). As published in Nature, the GERDA experiment succeeded in reducing the radiation background to an extent that there are practically no disturbing signals any more. If the germanium detectors now measure signal events, there is a high probability that it is the decay being sought. It would be evidence that the neutrino is its own antiparticle, an explanation for the finding that there is hardly any antimatter left in the universe. 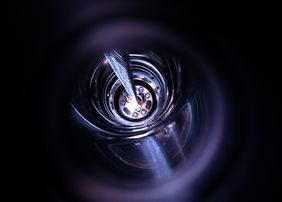 Neutrinos are very light particles that interact hardly at all and therefore pass through all matter without leaving a trace. They are produced in the sun and play a role in supernova explosions as well as in the formation of the elements at the beginning of the universe.

Why is neutrinoless double beta (0nßß) decay so important? Theoretical considerations and the fact that neutrinos have a mass* suggest that they – in contrast to all other particles – might be their own anti-particles as well. This would mean that 0nßß decay has to exist and it should be possible to observe it in materials such as germanium-76.

Detecting this characteristic, which is also called the “Majorana property”, could also explain why today’s universe contains almost no antimatter. Around the world, about a dozen experiments are searching for this radioactive decay; they employ a variety of methods in their searches.

Germanium – both source and detector

The GERDA experiment uses germanium-76 as the detector material. If two germanium nuclei decay simultaneously, two electrons and two neutrinos are released. If the neutrino is its own antiparticle, the two neutrinos produced in the decay could annihilate each other.

The total energy released in the decay would then be transferred to the electrons – the exactly known energy is the fingerprint we are looking for,” explains Béla Majorovits from the Max Planck Institute for Physics and technical coordinator at GERDA.

With a half-life of more than 5 x 1025 years – many billion times the age of the universe – this decay would be extremely rare, however. It is therefore very important to screen the experiment from natural radiation, the so-called background.

“Earth is continuously bombarded with particles from space, and added to this are the natural radioactive sources,” says Majorovis. “If these particles impinged onto the detectors without shielding, it would be impossible to detect the 0nßß decay.”

GERDA is therefore well-protected: It is located in the Laboratori Nazionali del Gran Sasso underground laboratory of INFN, below 1,400 meters of solid rock. The experiment itself has double shielding: The germanium detectors are submerged in a tank filled with liquid argon, which absorbs most of the radiation originating from the tank.

The tank in turn is housed inside a container of ultrapure water. Furthermore, the scientists have also made provisions for the rare event that muons or other particles find their way into the argon tank after all. They employ a system of different light sensors to discover these particles and discard their signals.

The publication in Nature now reports an important success for GERDA: The experiment is radiation-free in the energy range of interest – this increases the chance of detecting neutrinoless double-beta decay. The current measurements have been underway for five months – with no indications of 0nßß decay so far. The data are being recorded until mid 2019.

* In 2015, Takaaki Kajita and Arthur B. McDonald were awarded the Nobel Prize for their proof that neutrinos posses mass.