Is the neutrino its own antiparticle? How large a mass do neutrinos have? Scientists working on the GERDA experiment want to find answers to these questions. The first results of the second measurement phase, which began in December, were recently presented at the Neutrino 2016 conference in London. 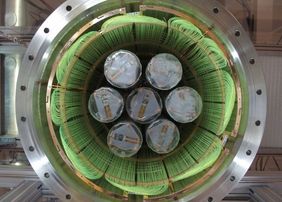 View from below into the GERDA experiment: Seen here are the cables of germanium diodes and the shielding. (Photo: GERDA)

Detection of the neutrinoless double-beta decay could solve several mysteries of particle physics: It would be shown that the neutrino, which is very light in comparison to other massive elementary particles, is identical with its own antiparticle. In addition, this could provide the basis for an explanation of the absence of antimatter in the universe.

In their search for the neutrinoless double-beta decay, the GERDA researchers are counting on germanium detectors. The material is enriched with the isotope germanium-76. In December 2015, GERDA started its second measurement phase – fitted with more germanium diodes and equipped with additional light detectors for the identification of unwanted background signals. So far, the extremely rare radioactive decay the researchers are looking for has not been observed. Nevertheless, this series of tests is yielding important insights.

New limit for the half-life of germanium-76

Because there was no measurable decay in the test phase, the physicists were able to set a new lower limit for the half-life of germanium-76: 5 x 1025 years.* This can be translated into an upper limit for the Majorana neutrino mass of 150-250 megaelectronvolts. That means a neutrino that is identical with its antiparticle (Majorana character) would be at least 2,000 times lighter than an electron.

The GERDA researchers were also able to demonstrate a ten-fold reduction of the interfering signals due to natural radioactivity, thanks to a novel shielding concept – an important requirement for undertaking ambitious projects with even higher sensitivity.

In all, 36 kilograms of detector material are built into the GERDA experiment. This corresponds to a total of around 1026 germanium-76 nuclei in which the neutrinoless double-beta decay might be detected. With this number of nuclei and a half-life of 1026 years, it should be established within a few years whether this decay actually exists.

Behind the GERDA experiment stands a collaboration of 16 international research institutions. The Max Planck Institute for Physics is responsible for developing and maintaining the infrastructure of the liquid argon-filled tank that provides the shielding, and particularly for the fluid control technology with which the detectors are submerged in the tank.

(*) Time in which half of the deployed germanium-76 isotope has decayed.