After only a few months construction time, the CTA project reached an important milestone: Last week, the mirror mountings were installed on the first Large-Sized Telescope (LST) of the CTA observatory. The LST (Large-Sized Telescope) is the largest model of the about 100 telescopes to be built in the CTA observatory. The prototype for this model is currently being erected on La Palma, in the Canary Islands, and should become operative in 2019. 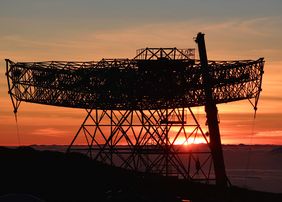 The telescope dish material consists of reinforced carbon fibre and has a gross weight of 18 tonnes. A crane heaved the dish to a height of 18 metres before it was securely anchored to the telescope base after only four hours.

During the next decade, the CTA project aims to install more than 100 telescopes to detect and analyze highly energetic gamma rays from the universe.

Around 1350 scientists from 32 countries collaborate in the CTA consortium. The Max Planck Institute is one of the leading bodies in the development and construction of the LST prototype.