Things are looking up for the first CTA telescope: A recently installed counterweight now ensures that the telescope dish will remain in a vertical position, meaning that the telescope is now ready for mounting the mirror supports and the mirrors. This effectively marks the end of the principal work of the Max Planck Institute (MPP) for Physics on the prototype of the world’s largest telescope in the CTA Observatory with a mirror diameter of 23 meters. 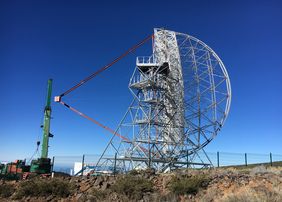 The first telescope in the CTA observatory is ready for mounting the mirrors. (Photo: Th. Schweizer/MPP)

Over the past few days, technicians have placed the dish of the Large Size Telescope (LST) in an upright position and anchored it in place using a temporary counterweight. “The work just completed has shown that the manual telescope drive and the guide mechanism are working smoothly,” says Thomas Schweizer, scientist at the MPP and Project Leader for the construction of the LST. “The telescope can literally be moved with one hand.”

With the telescope in a stable parked position, installation work can progress. In the coming weeks, the cable chains and the components that hold the telescope mirrors will be mounted. They will be followed by the mirrors, the camera support, the camera tower and the camera. Construction of the telescope is running to plan. The LST prototype is scheduled to be completed this summer and will be operational in October 2018.

As part of the CTA project, around 100 telescopes in three different sizes will be erected at two sites: La Palma (Spain) and Chile.

The MPI for Physics is involved in the construction of the prototype of the largest telescope model (LST) on La Palma. Scientists and technicians of the Institute designed and built the foundation and the guide rails on which the telescope can be moved to any desired observation position in less than 20 seconds. The Institute is also responsible for building the camera tower, which allows direct access to the camera.