Why is there matter in the universe, but hardly any antimatter? Researchers are pursuing this question at the Belle II experiment in Japan. In the particle accelerator SuperKEKB, matter (electrons) and antimatter (positrons) are brought into collision. Among the particles produced as a result, the researchers are searching for indications that could explain the surplus of matter.

According to present-day knowledge, this imbalance came to be because a fundamental symmetry property of particles was violated. The physicists hope for new insights from B mesons, with which they already have been able to provide evidence for a violation of this symmetry. This type of particle is created together with its antiparticle when electrons and their antiparticles, positrons, crash into each other.

The SuperKEKB accelerator serves as a "factory" for B mesons. B mesons only live a short time; after the tiniest fractions of a second, they decay into other particles. These decay tracks are recorded by the Belle II detector and analyzed. So that the differences in the decay patterns of the B mesons and their antiparticles can be seen, the detector must exactly measure the locations where they decay. That's why, in the innermost area of Belle II, there sits a high-resolution pixel vertex detector – a type of precision camera – that the MPP took a leading role in developing.

Starting in 2011, the research plant was completely overhauld too improve its physics measurements. In the future, about 1,000 meson pairs will be produced, i.e. 40 times the production rate achieved by the KEKB predecessor. In parallel, also the former Belle detector was modernized to the new version Belle II. The first measure run started in March 2019.

After the Big Bang there came into being heavy particles of matter and antimatter that have yet to be identified. These primordial particles decayed into the particles and antiparticles familiar today: quarks and antiquarks, electrons and postrons, muons and antimuons, and so on.

If a particle and its corresponding antiparticle meet, they transform themselves into energy; they mutually annihilate each other. Therefore no material should have been able to form in the universe – at least not permanently.

Admittedly, atoms, molecules, stars, planets, and galaxies provide us with conclusive evidence for the existence of matter. Physicists suspect that the heavy primordial particles decayed differently: Somewhat more matter particles formed than antimatter particles – that is, more quarks than antiquarks, more electrons than positrons, and so on. As matter and antimatter mutually annihilate each other, all that remained in the universe was the small excess of matter.

The Belle II detector records about 5,000 collision events per second. However, only a fraction of these are of interest for physical questions. In order to distinguish the real signals from unusable data, the experiment uses “triggers”. Since the end of February, Belle II has been working with an…

Tailwind for the search for rare particle decays in the Belle II experiment: The SuperKEKB accelerator ring has now achieved the highest luminosity ever measured. The electron-positron accelerator beats not only its predecessor KEKB but also the Large Hadron Collider (LHC) at CERN. This has just…

The Belle II experiment has been collecting data from physical measurements for about one year. After several years of rebuilding work, both the SuperKEKB electron–positron accelerator and the Belle II detector have been improved compared with their predecessors in order to achieve a 40-fold higher…

The Belle II detector got off to a successful start in Japan. Since March 25, 2019, the instrument has been measuring the first particle collisions, which are generated in the modernized SuperKEKB accelerator. The new duo produces more than 50 times the number of collisions compared to its…

A few days ago, the final components were installed in Belle II. With the aid of special tracks, technicians very gently pushed the highly sensitive vertex detector into the correct position inside the Belle II detector. Over the coming weeks, the vertex detector will be linked via cables to the…

Everything is ready for the installation of the innermost detector for the Belle II experiment. Following successful measurements with a test instrument, the actual pixel detector (PXD) has now reached the KEK research institute. Together with one other component, it will make up the vertex detector… 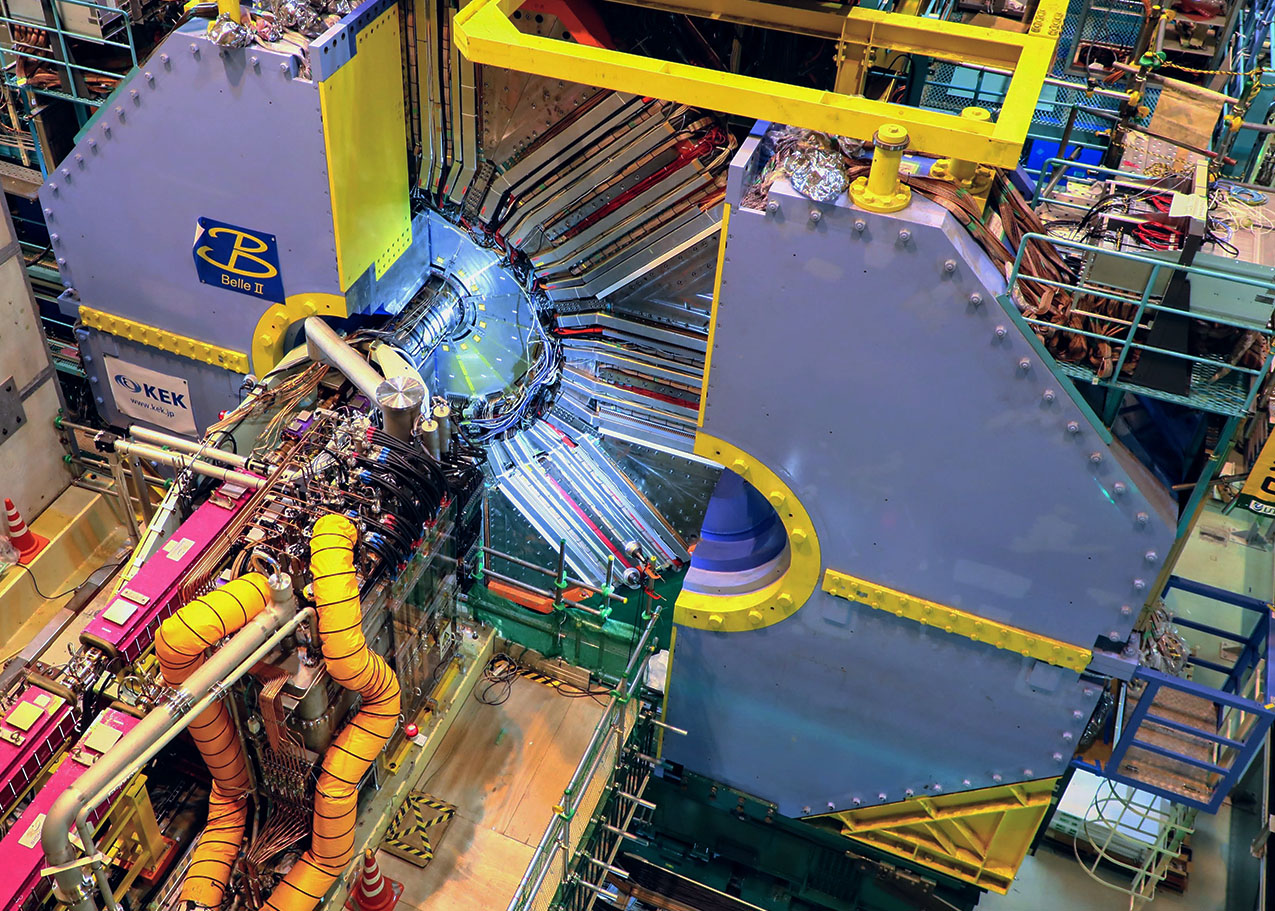 The particle physics community has been waiting for this moment for a long time: On 26 April 2018 0:38, GMT+09:00 at KEK in Tsukuba, Japan matter and anti-matter particles collided for the first time in the new SuperKEKB accelerator. News of this success came from the detector, too: The Belle II…

Following an eight year conversion period, the SuperKEKB particle accelerator in Japan is almost ready to restart: soon, electrons and positrons will be brought to collision in the completely modernized accelerator ring. In future, the Belle II detector, also modernized, will record and evaluate…

Preparations for the new Belle II detector at the modernized SuperKEKB accelerator in Japan are in full swing. A few months ago, Belle II was rolled into position in the accelerator ring. Individual detector system tests will now follow: on November 18, 2017, physicists and engineers installed the… 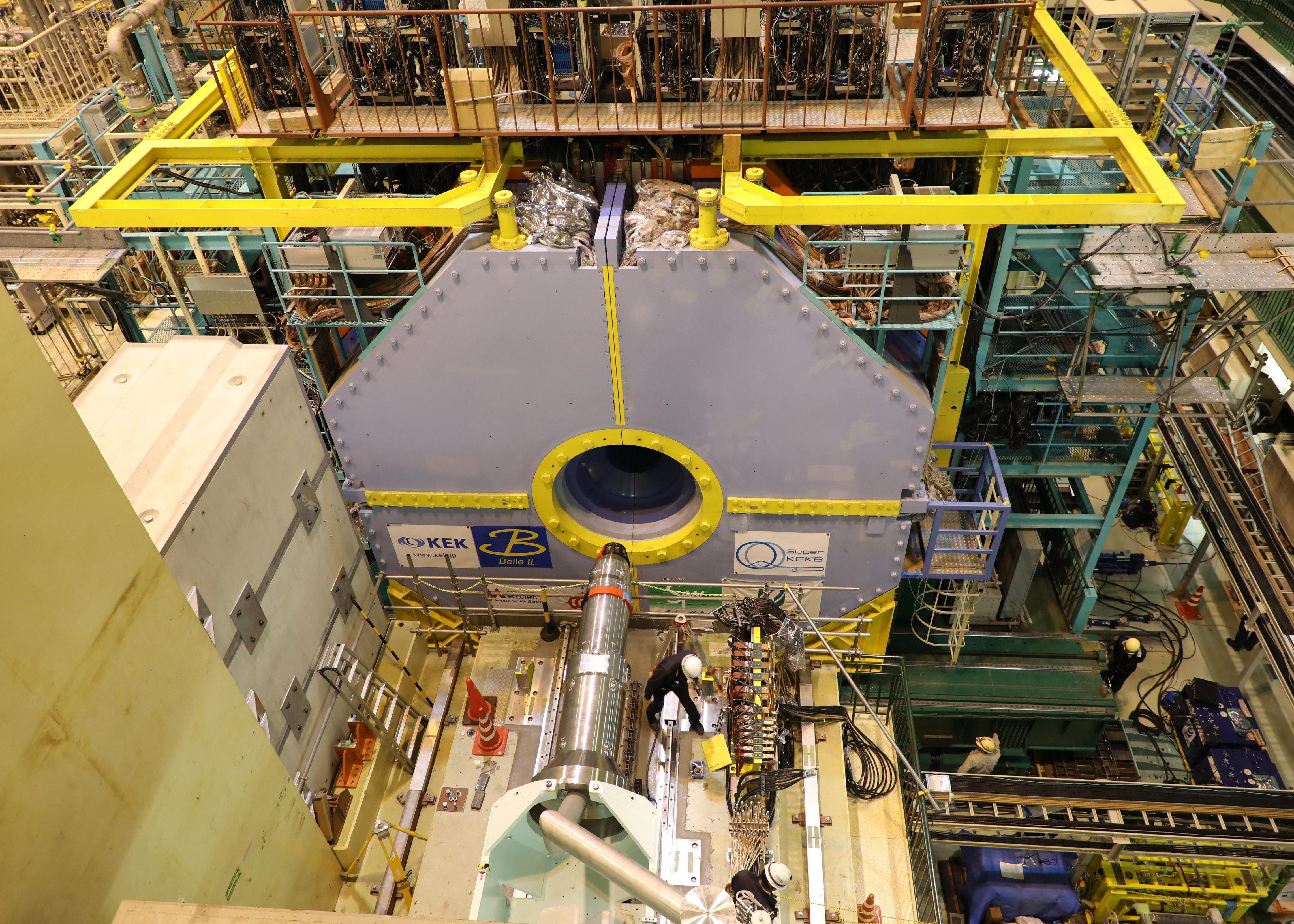 The High Energy Accelerator Research Organization (KEK) successfully completed the "roll-in" of the Belle II detector. This is an important milestone for the international Belle II collaboration and the SuperKEKB accelerator.

The pixel vertex detector is a precision instrument in Belle II. It provides an exact determination of where the electrons and positrons collide - with an accuracy of one hundredth of a millimeter. Which technology is behind it?

Scientists are hoping that Belle II will help them find new approaches to solving still outstanding issues of particle physics - the antimatter mystery is but one of them.